23 Years and counting with the Contax G1 and G2 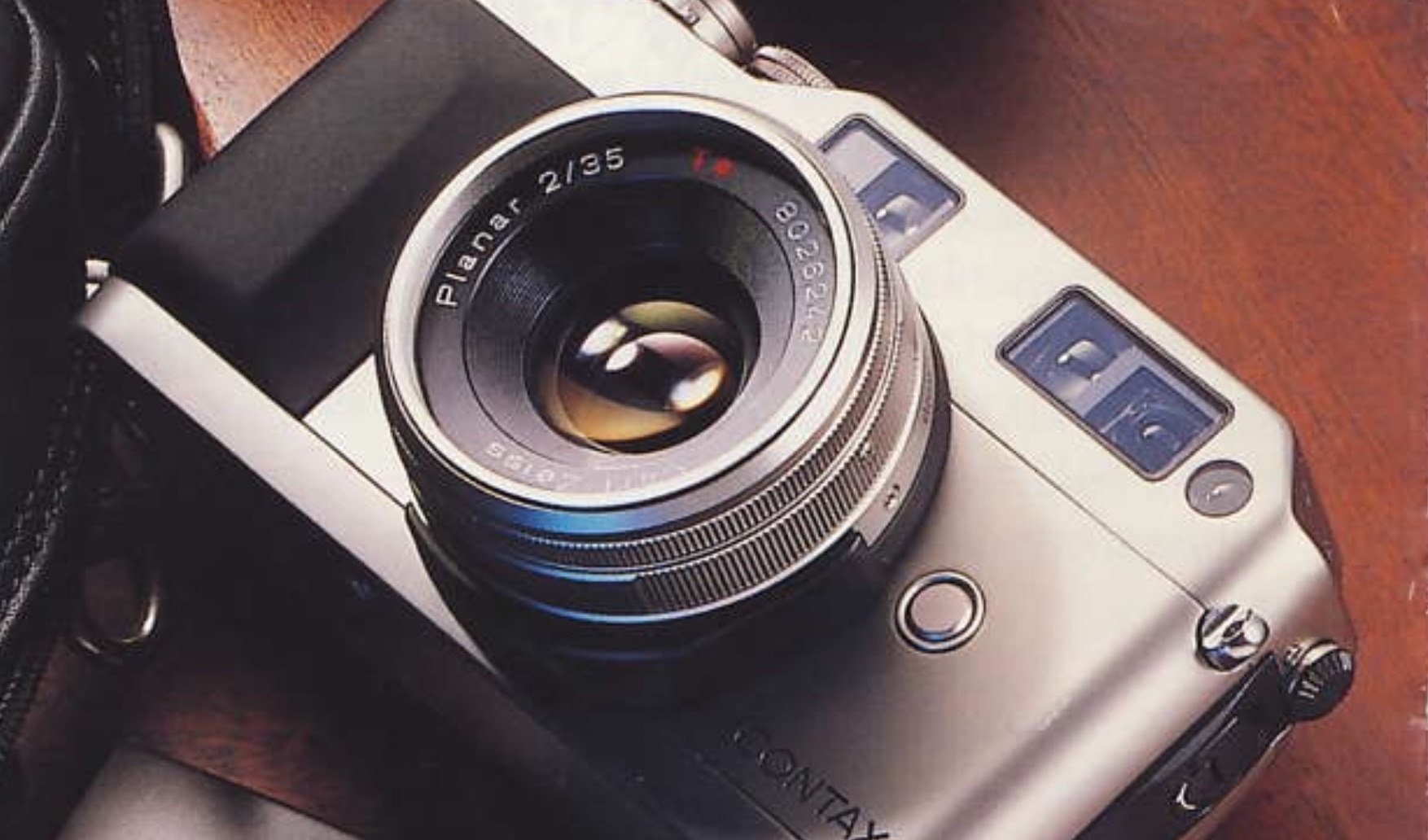 I had never used or even picked up a rangefinder in May 1999 when I was walking back to the office from the “Carnival Against Capital” protests in the City of London, and I was hauling a lot of gear and tired with it. I had my F90x with the MB-10 grip and pretty sure I had a 28mm, 50mm, 85mm, 180mm, an SB-25 flash, a dozen rolls of film and it was all piled up in the big Billingham 500. So fairly heavy.

I have this thing about not using zoom lenses, I just don’t like them, I find them slow operationally to use, slow as in not letting enough light in, and compromised optically, all of which are true, but over the years I have bought two zoom lenses, a Nikon 80-200 that I ditched in 2009 and a Canon 24-105 II that I use casually all the time now because I just cannot be bothered to do anything else casually if I take the Canon out.

I left Oxford Circus and was walking up Regent Street towards the office on New Cavendish Street, and naturally, there was a camera shop on the corner to cross the road into aforementioned street. Jacobs Photo & Video (the entire chain closed in 2013) which had a delightful window display of various Contax cameras. 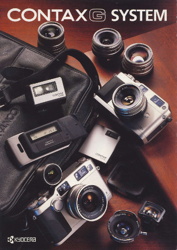 Contax cameras were neither widely used or sold, or even widely known for that matter, but were considered beautifully made and competitive with any other camera system - they all shot on the same film, after all. Their distinctive selling point was their partnership with Carl Zeiss, who designed all the lenses, mostly made under licence by Kyocera in Japan to Zeiss standards. Which meant that they were excellent, all-round.

Back in the day, Photodo was one of the authoritative sources of lens measurements. The site is still up and the Contax 45mm is still up: 45mm at Photodo and if that link is broken, I archived it here and also here.

The cameras on display, however, were not the usual range of SLRs, but instead the unique Contax G rangefinders, which I was only dimly aware of. They were stunning in titanium, but more importantly at that moment, small, and presumably light.

I dragged myself into Jacobs and played around with the G1 and G2 for a little while. The G2 was clearly the superior, better built and faster all-round, but it was £899 in 1999. And the G1 was £679. I could just afford a G1 body and a 45mm lens. I can’t remember how much the lens was, but I suspect that the total was close to the G2 body only price.

Wandering back to the office slightly more heavily-laden than when I had left, and bolted the new toy together. I ditched the F90x at home and started using the G1 for everything. It had an immediate impact on my pictures. 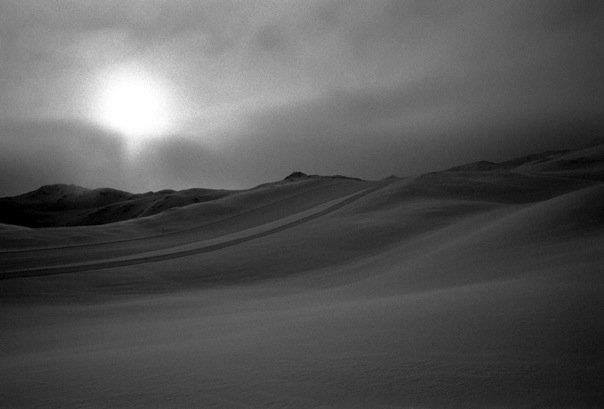 Cameras aren’t really welcome up close in people’s faces, and big cameras less so. The G1 didn’t change that, but the effect was lessened, and the lens’s close focus distance of 50cm positively encouraged me to get close, plus the light weight made it so easy to swing into action. The results spoke for themselves.

Note: this are all old scans made back between 1999 and 2001, so you’ll have to forgive the resolution and quality. 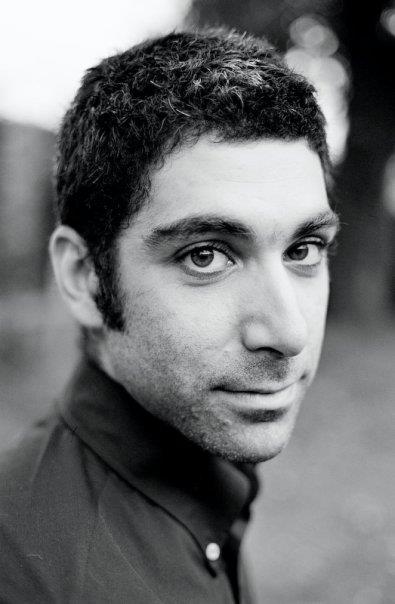 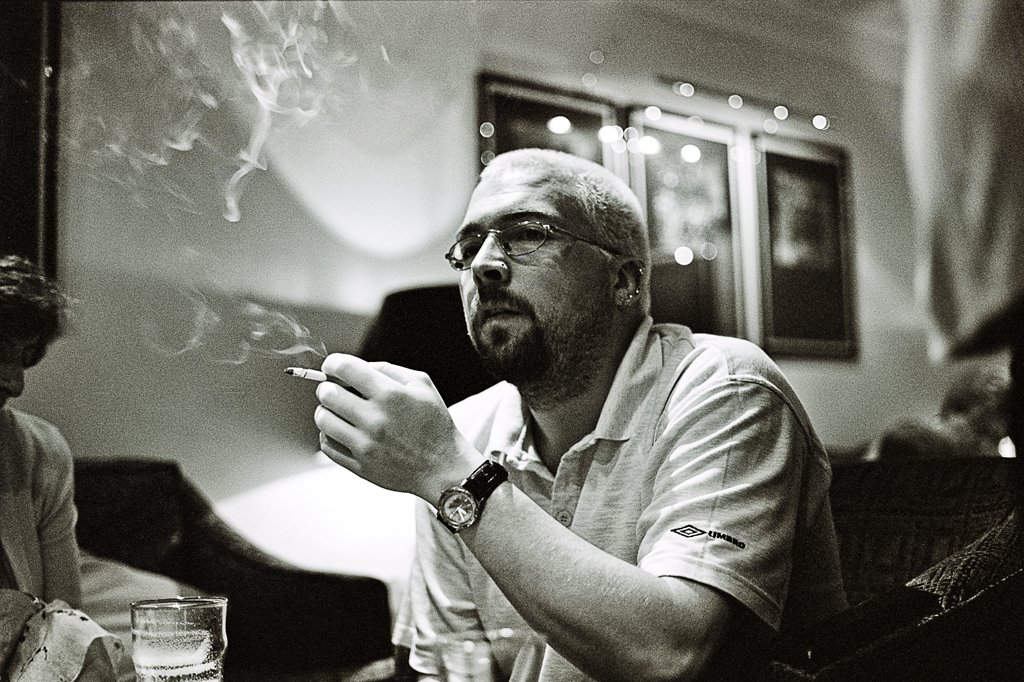 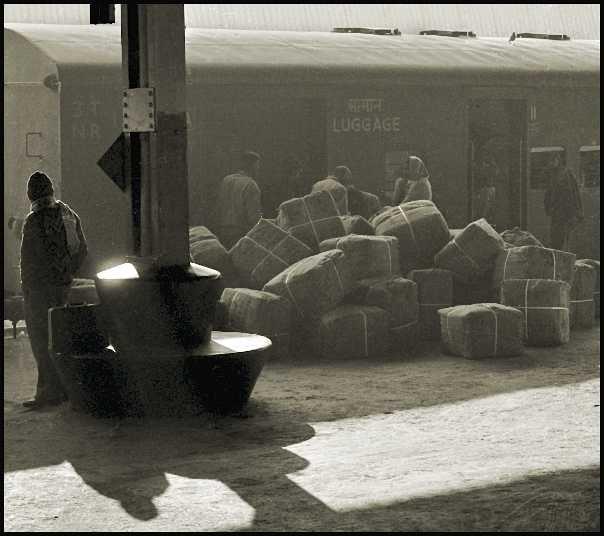 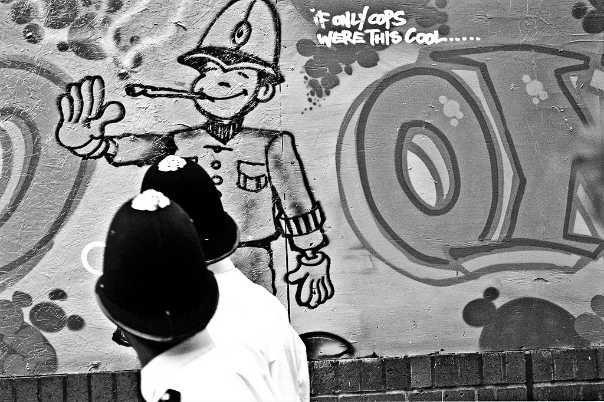 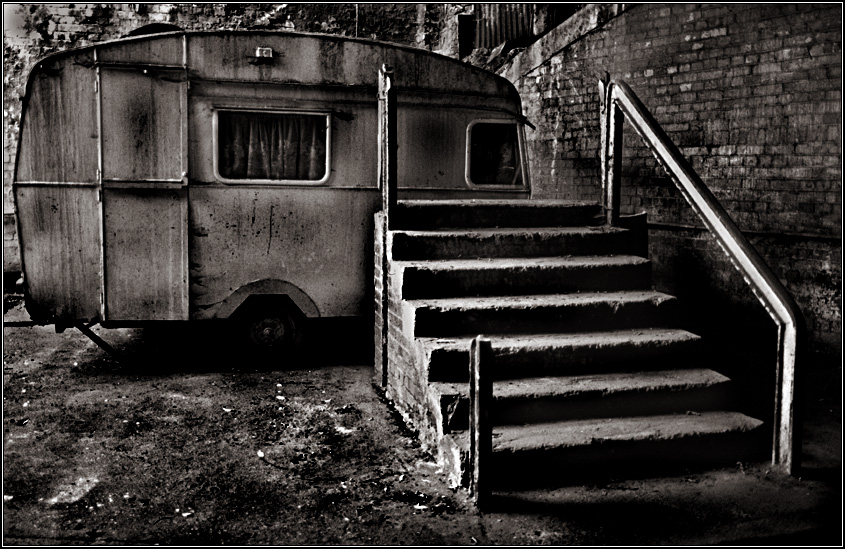 After three years with the G1, I managed to accumulate three lenses, the 28, 45 and 90, a little flash, and had joined the amazing Contax G community run by Glen Campbell. There were two other websites catering for the Contax G system, one run by Kyocera in Japan and the “Contax G Pages” which were a comprehensive guide to the cameras and peripherals available. All three sites are now lost to us, partially due to web rot and partially due to a unrecoverable data corruption of both site and backups. The Contax G community was the first place anyone ever told me I was any good, or rather, my pictures were. All the pictures above first featured there.

After all we had been through, the G1 and the original 45mm left my life in the most annoying way possible: I lost them. I put the camera on the ground while I was putting on my motorbike waterproofs outside a bar, walked off to the bike without the camera, freaked when I remembered, ran back to no camera. Bye G1. Ah well, the little bit of dust that 45 dragged in was always annoying. 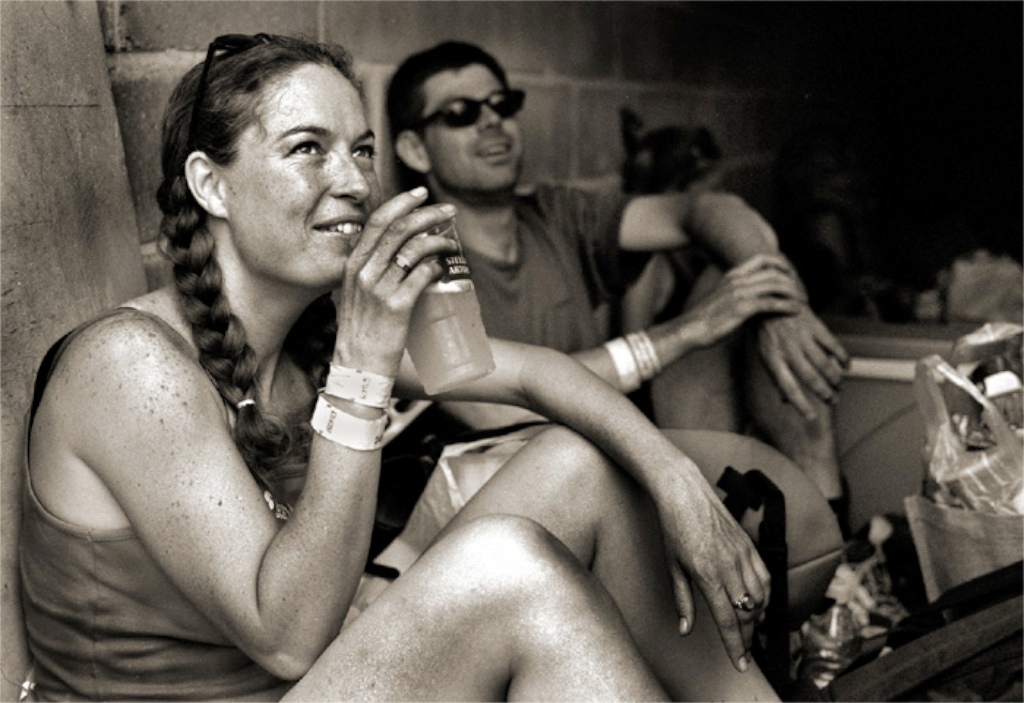 I still had my 28, 90, flash and accessories, so I saved up for a G2 from the long-departed MXV of Uckfield, who always had good stocks of Contax kit, and paid £325 for the body. This was the early 2000s when film cameras were abundant and the market was very healthy.

Having not touched a G2 since the day I first bought the G1, I was extremely impressed. The focus was much faster, the motor drive too, the controls were better and normal photographic service was resumed.

After many more years, I starting picking up random Contax spares that I spotted on ebay, knowing that should anything happen to the G2, there would be no stock of parts available anywhere. And to that end, a second G2 body arrived from Japan in 2015, as an insurance policy, which turned out to be an excellent move. 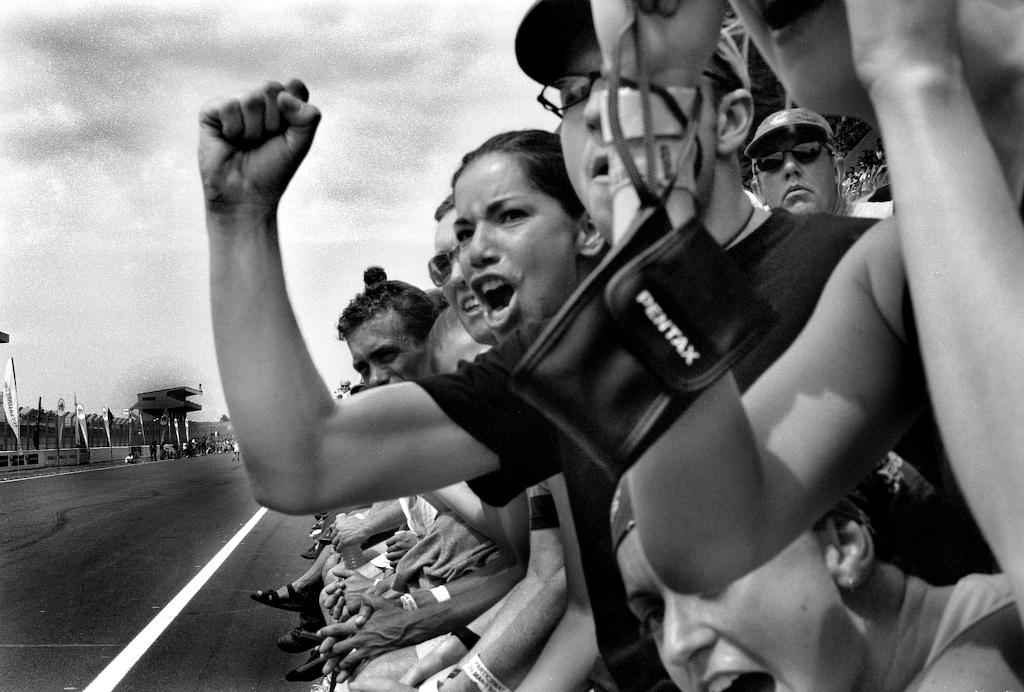 I lent my friend Miles the camera to use back in 2010, without any tips, warnings or practice, which in retrospect was a terrible idea…

I think this is the worst camera I have ever had the experience of using. I ran eight rolls of Kodachrome through it on a trip once and thought I was capturing gold! I don’t think I ever showed anyone any of those photos as I was so ashamed at how bad they were. Don’t get me wrong, the camera looks (and sounds) great, shiny titanium body, amazing CZ glass, simple enough controls, but fuck me, composing a shot… I just couldn’t do it. This is probably more a reflection on my inability to use a rangefinder, but to be honest I could have probably pulled off better shots shooting from the hip.

And let that be a warning to you all.

It’s around 800 grams loaded with battery and film and a 45mm. Mine has a GD-2 back and the half case around it so it’s heavier, but it’s lighter than a Nikon F90x with an MD-10 grip and a lens.

All Contaxes are good to use and the G cameras are tactile, great to hold, and have excellent physical controls with engraved markings. The viewfinder is parallax-corrected and shows all the info you want. The lenses all work in a cohesive way as a family.

As always, the majority of internet discussion focuses on the cameras and not the lenses, but they are the real stars of the show. They have been cheap for many years but it must surely change soon. The four superstar lenses are the 21, 28, 45 and 90. The 35 is shown up by its neighbours and the 35-70 zoom is a compromise. The 16mm is a very specialized lens with a fixed aperture and extreme vignetting that requires a compensatory filter, and I personally don’t know too much about it.

The G2 is not getting any cheaper and prices seem to be accelerating away from the G1. G1 body prices are way below their new price, so considerably cheaper allowing for inflation. Right now, that represents a bargain, as they’re excellent cameras and will reward practice. Buy one with a 45mm. Make sure it’s a green label camera, you have no way of getting it upgraded.

The G2, on the other hand, is double or triple the price of the G1, and so I honestly can’t recommend it to start off with.

While not non-existent, it may be prohibitive to get one of services to dismantle and diagnose any problems.

It is small, especially if used to the giant viewfinders of Nikon F2s and F3s, but it does possess dioptre correction, which is more than you can say of most SLRs or any Leica M. 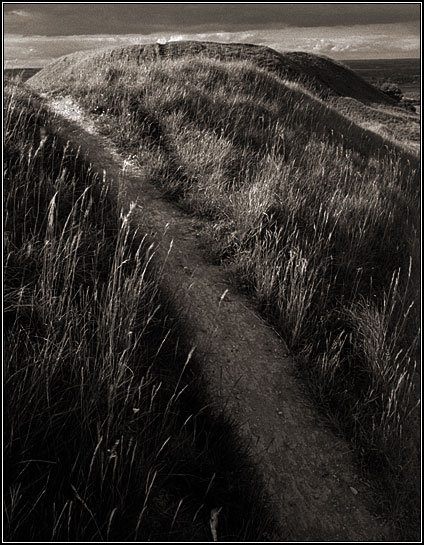 Buy the very best camera you can. Or buy a rare version. The black G2 is less common, but what is not widely-known is that there were TWO black versions. One is the matt black finish that is often seen, and the other was a piano-black glossy painted finish that was extremely beautiful.

The autofocus is fine, once you get used to it. It does struggle in some situations, like backlighting, but often works extremely well in low-lighting, especially the G2. If you are going to splurge on a G, be willing to put the time in to get used to it and find the exact focus spots in the viewfinder target.

Next: A Visual Guide to the Contax G2

23 Years and counting with the Contax G1 and G2